Neuroimaging: A snapshot of the suicidal brain 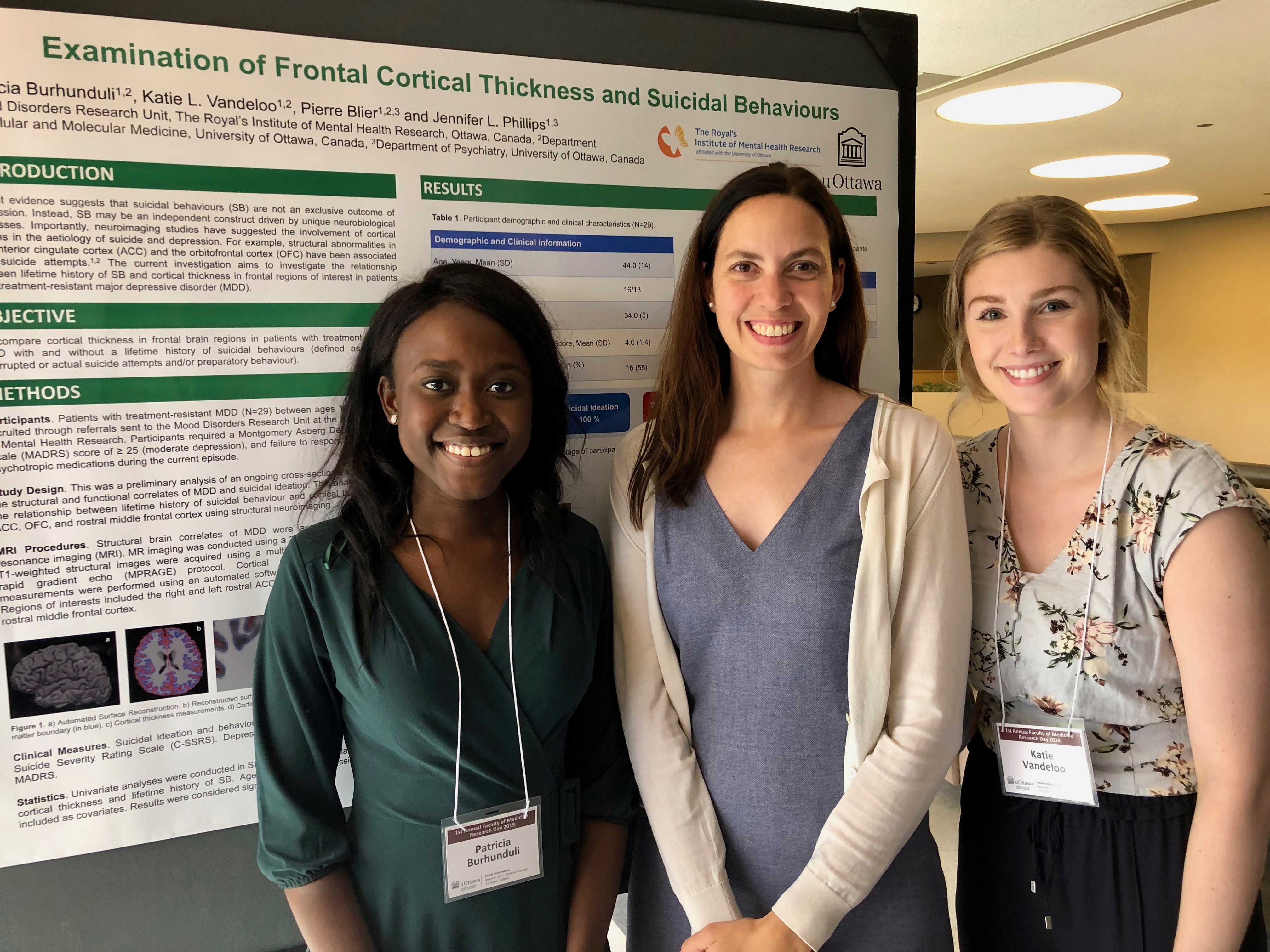 From left, Patricia Burhunduli, Dr. Jennifer Phillips and Katie Vandeloo are researchers at The Royal currently studying brain biomarkers that are associated with individuals with treatment-resistant depression who are most at risk of suicide.
False

Understanding the progression of treatment-resistant depression

Suicide is the second-leading cause of death among youth and young adults in Canada. Every year, 4,000 people die by suicide in Canada alone. Suicidal ideation – thinking about, considering or planning suicide – is a common symptom in patients with major depression.

Yet despite its high prevalence, very little is known about its biological underpinnings. Few treatments are available.

Dr. Jennifer Phillips, an associate scientist in the Mood Disorders Research Unit at The Royal’s Institute of Mental Health Research, and her research team are currently studying brain biomarkers that are associated with individuals with treatment-resistant depression who are most at risk of suicide.

Using magnetic resonance imaging (MRI) at The Royal’s Brain Imaging Centre (BIC), the research team is examining the brain’s structure by measuring the volume of various brain regions, the thickness of brain tissue and the white matter tracts in the brain that connect different brain areas. They are also looking at brain activity to identify brain networks that may be associated with suicidal thoughts and attempts.

Imaging data from the study participants is then combined with clinical factors and behavioural traits associated with suicide – factors such as impulsivity, hopelessness, perceived stress and childhood trauma.

“One of the biggest challenges in mental health research is suicide prevention,” says Dr. Phillips. “Suicidal thoughts can be very common among individuals with mental illness, yet not all will progress towards making a suicide attempt. Learning how to identify those at highest risk is a key goal in this field.”

In addition to examining neuroimaging and clinical risk factors, the team is combining the imaging data on suicide with markers of inflammation in the participants’ blood, found to be elevated in people who have died by suicide. The study is among the first of its kind to combine these factors. They hope to uncover valuable biomarkers of suicidal ideation in patients with treatment-resistant depression, and identify potential targets for treatment.

“Depression is so complex and difficult to understand, and there are many factors that can lead to depression and suicidal ideation,” says Patricia Burhunduli, an MD/PhD student working on the study alongside Dr. Phillips. “This study is a stepping stone towards improving our ability to identify patients with major depressive disorder who are at highest risk of suicide, which can open the doors for improved treatment and prevention measures.”

“Learning how to identify those at highest risk is a key goal in this field.”
– Dr. Jennifer Phillips, an associate scientist at The Royal’s Mood Disorders Research Unit

People with treatment-resistant depression may have brain structure or function that looks different than others, but researchers still don’t know why this is. Katie Vandeloo, another graduate student working on this study, has been examining the brain scans of healthy individuals, people with suicidal thoughts and people with suicide attempts to characterize a brain biomarker spectrum and see what’s unique about people who experience depression, suicidal ideation and behaviours.

“We don’t really have personalized medicine in mental health right now,” Vandeloo says. “People who have depression see a doctor and start a medication, but that medication is just a ‘one-size-fits-all’ kind of treatment.”

This multi-dimensional study is allowing the research team to examine suicide from biological, clinical and psychosocial perspectives, something that is essential to progress towards suicide prevention.

The end goal of the study is to better understand what a suicidal brain actually looks like – to understand the progression from suicide ideation to suicide attempt – in order to more effectively inform and target treatment for people with treatment-resistant depression and suicide ideation.

“This study is a stepping stone towards improving our ability to identify patients with major depressive disorder who are at highest risk of suicide, which can open the doors for improved treatment and prevention measures.”
– Patricia Burhunduli, aN MD/PHD student at The Royal’s Mood Disorders Research Unit