Clinic for military, veterans and RCMP expands to Kingston 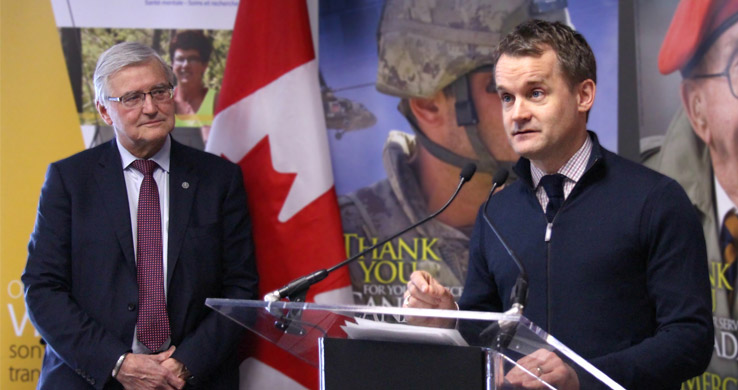 Once a week, Kevin Fathers makes the four hour round trip from Kingston to Ottawa for appointments at The Royal’s Operational Stress Injury (OSI) Clinic.

“If my therapist was in Montreal, I’d drive to Montreal every Thursday,” he says. “If it wasn’t for the OSI Clinic, I probably wouldn’t be here. I was going to some dark places.”

Now, help will be closer to home for active Canadian Forces, veterans, and RCMP in the Kingston area. The Royal’s OSI Clinic officially opened a new Kingston location, filling a deep community need due to the high concentration of active and former military personnel in the area.

“When these individuals who have given so much in service to our country are struggling with their mental health, they shouldn’t have to look far to find help,” said George Weber, president and CEO of The Royal, at the opening in Kingston on April 5.

Fathers spoke at the opening, sharing his experience. He served in the Canadian Forces for more than 35 years, deploying to Iraq, Syria, Israel, Bosnia, Afghanistan, and Nepal. This service took a physical toll, leading to Fathers’ release from the military, but it also took a mental toll.

“When I released in 2015, it should have been a happy time for me, but my life fell apart,” said Fathers. “I’d probably been struggling with PTSD for 20 years, but I kept myself so busy. I didn’t have time to think about all the things I’ve experienced. When I released, I couldn’t just suck it up anymore.”

The Royal’s OSI Clinic is a specialized outpatient program serving veterans, current Canadian Forces members, and RCMP. It’s part of a network of clinics funded by Veterans Affairs Canada to care for the mental health of the people who, in the course of their service, have developed concerns such as posttraumatic stress disorder, depression, substance use problems, and other conditions.

"When these individuals who have given so much in service to our country are struggling with their mental health, they shouldn’t have to look far to find help."“By providing specialized, evidence-based assessments, treatment and support, as well as educational programs and therapy for individuals, couples and families, we are now better able to assist those in the Kingston area,” said Minister of Veterans Affairs Seamus O’Regan who delivered special remarks at the opening event in Kingston.

The Royal opened its first OSI Clinic in Ottawa in 2008. Since then, it has received more than 2300 referrals and has grown to include a satellite clinic in Arnprior, dramatically increasing access to care in the Ottawa Valley, plus telemedicine outreach across eastern Ontario and northern Quebec.

The OSI Clinic in Kingston is the latest addition to the specialized mental health care that The Royal offers to veterans, Canadian Forces members, RCMP, and their families.

“That’s a good thing, because it means people are seeking help earlier. We’re also seeing some effects of the military’s mental health culture shift in action,” Hale says. “We’re seeing soldiers who are more oriented to the Road to Mental Readiness and mental health in general, instead of the old ‘suck it up’ culture.”

The Kingston OSI Clinic has two dedicated psychologists, one social worker, one nurse, and one administrator. It’s also supported by clinicians and administrators at The Royal’s main OSI Clinic in Ottawa.

When a client is referred to the OSI Clinic, they are assessed and work with their care team to develop a custom-made, evidence-based treatment plan, including a range of specialized individual and group therapies.

The clinic has a comprehensive approach to recovery — it will help people become ready for treatment, reduce symptoms, and transition to living their fullest lives among their families and communities. This includes providing support to families and caregivers.

The Royal has also helped to build support tools that reach beyond the clinic including OSI Connect, an app that helps users understand the nature of operational stress injuries and find support, and the OSI Caregiver Resource, which provides education and self-care tools for family members and friends of people living with OSIs.

Now, with one more location for OSI services, more people can access timely care that’s close to home. For people like Fathers, that can make all the difference. “I’m not in the clear yet, but I feel a lot better about myself, my life, and what I’m going to do with it,” he said.