When John Phillips, a professional sign maker in Kanata, saw that someone on the internet was making mask extenders for front line health care workers, his first thought wasn’t quite what you’d expect.

Phillips made a sample mask extender using his laser cutter but quickly learned the design created more problems than it solved.

Mask extenders are meant to relieve pressure on the ears, where ear loops can cause friction if worn for a long time. If they don’t sit right, they don’t do what they’re meant to do.

He tested several designs before inspiration hit (which happened to be in the middle of the night).

“The next day, and within the hour, I had a piece that was one third the size of the other guy’s, ten times more comfortable, and worked perfectly,” he says.

Phillips had friends test the new design, and when they gave him the thumbs up he got to work, laser cutting thousands of mask extenders. (He can crank out 189 mask extenders an hour.)

Phillips and a network of friends delivered the mask extenders to hospitals, pharmacies, and long-term care homes in Ottawa and beyond, including The Royal, The Ottawa Hospital, the University of Ottawa Heart Institute, Queensway Carleton Hospital, and Hôpital Montfort.

He has donated over 5,000 mask extenders so far, and he’s invited each organization to contact him if they need more.

A better fit is safer for all 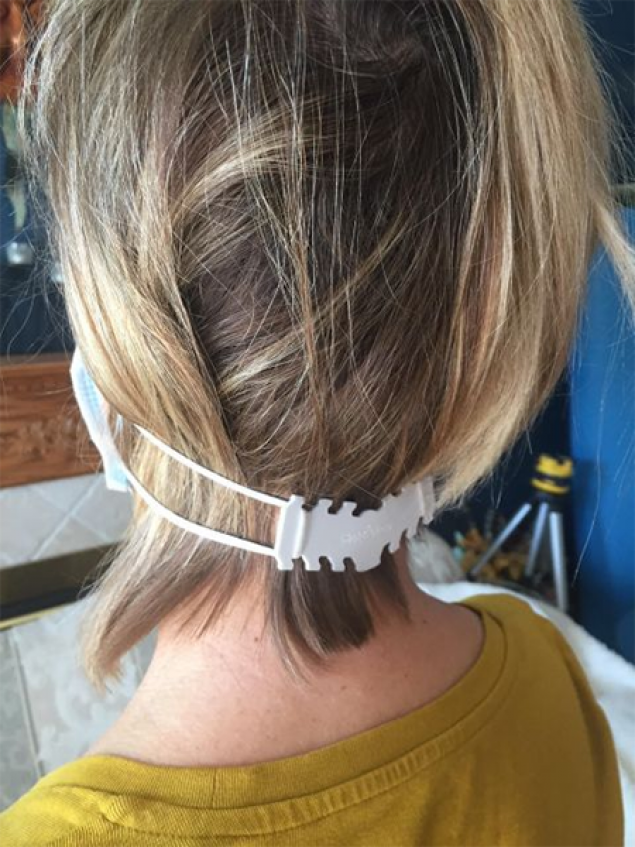 Phillips’ mask extenders are worn on the small of the neck instead of the back of the head. Worn this way, mask straps do not touch the ears but still keep the mask in place.

“A better fitting mask is a more effective mask. This makes it much more comfortable,” says Virginia Kopan, a pharmacist at The Royal. “I have a smaller face. I find it holds masks in place, otherwise they crawl up into my eyes. This keeps it down.”

Phillips’ goal is to get his mask extenders to the individuals working in health care who are required to wear medical-grade masks all day long.

He sees it as paying it forward – a natural thing to do. “Someday I’ll need some help, and someone will be there for me,” says Phillips, who volunteered during the spring floods and opened his home to multiple families during the ice storm of 1998.

He’s ready and willing to make mask extenders on a bigger scale for wider distribution as long as someone else can take care of the cost, and logistics of shipping. Phillips is also sharing his template so other people can make them.

For more information, check out his website at www.BuzzArt.ca.

Meet some other Ottawa families who are making mask extenders 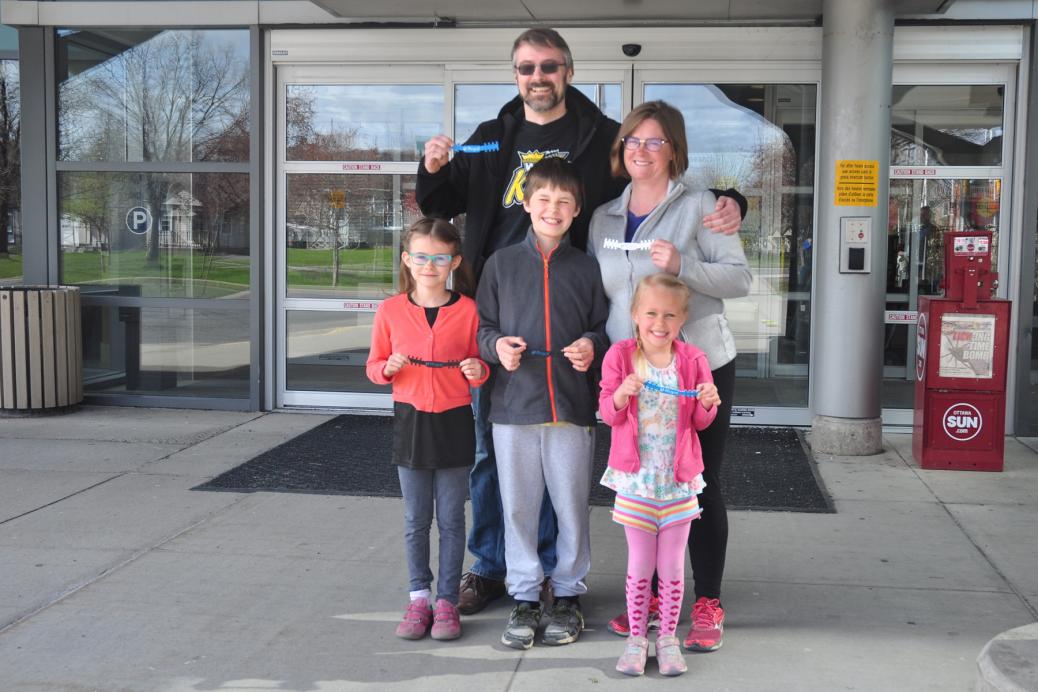 David and Dianne Stickley with their children, Caitlin (9), Aidan (11), and Evelyn (5) dropped off donations of mask extenders at The Royal on May 11. The mask extenders were made by the family on their 3D printer. “We’re very happy to help people who have to wear these every day,” says Dianne, who estimates they’ve donated 1000 extenders to The Royal and to CHEO. “The kids feel good knowing they are contributing.”
Image 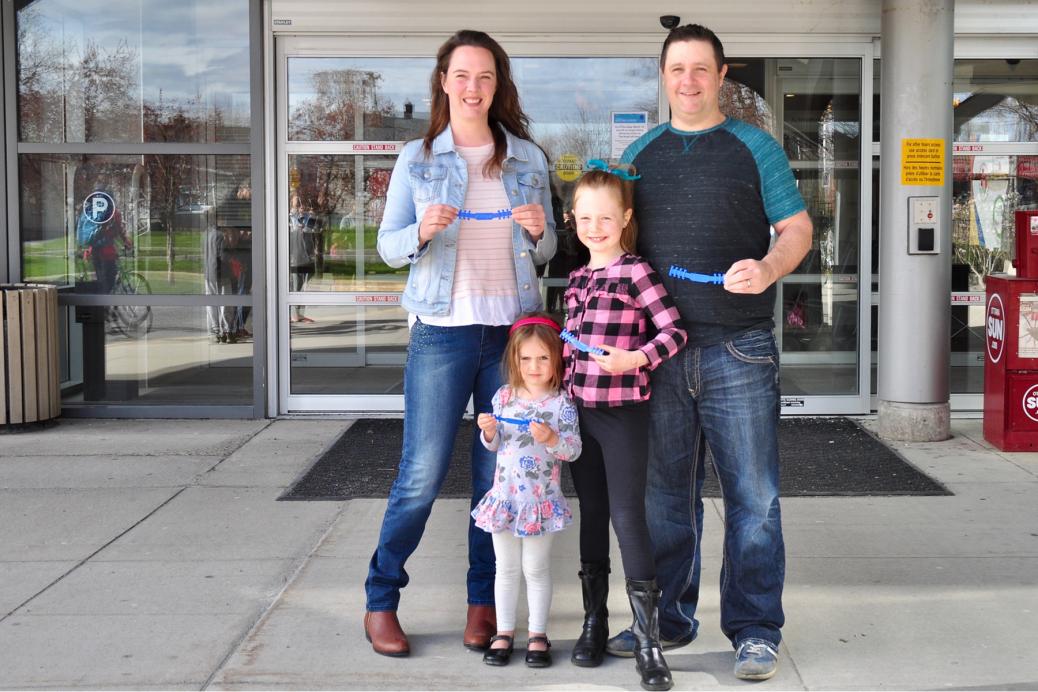 Alison Curleigh, Sienna McKinnon (3), Jasmine McKinnon (8), Laird McKinnon are friends of the Stickleys (above) and are also making and donating mask extenders.
Image 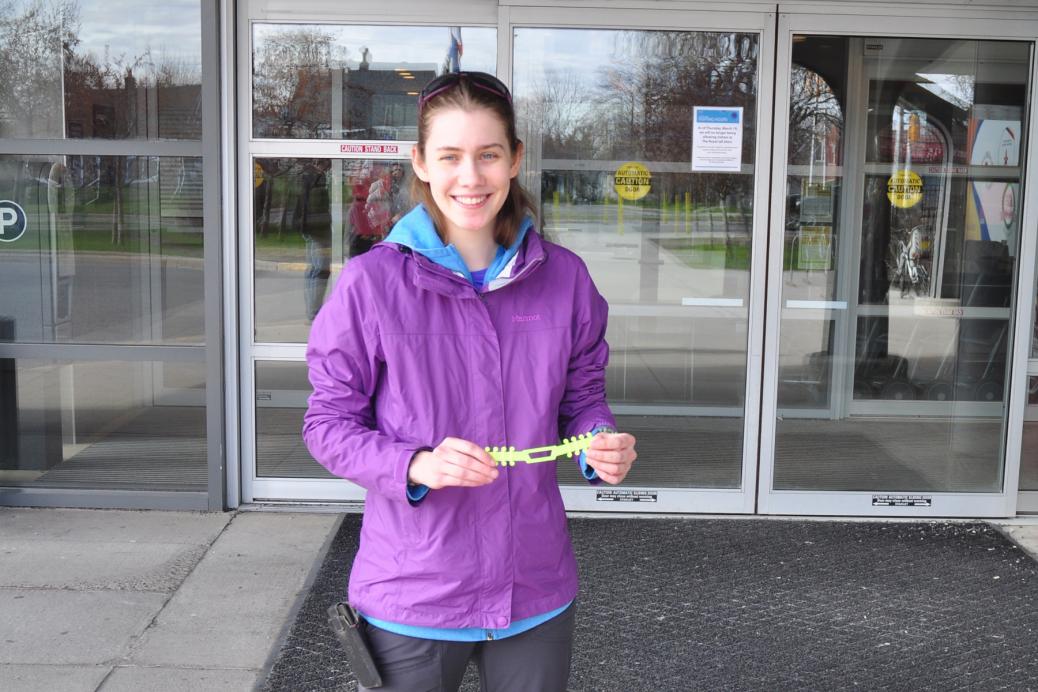 Melissa Scott is also part of a group of individuals who are making mask extenders for health care workers in the Ottawa region.