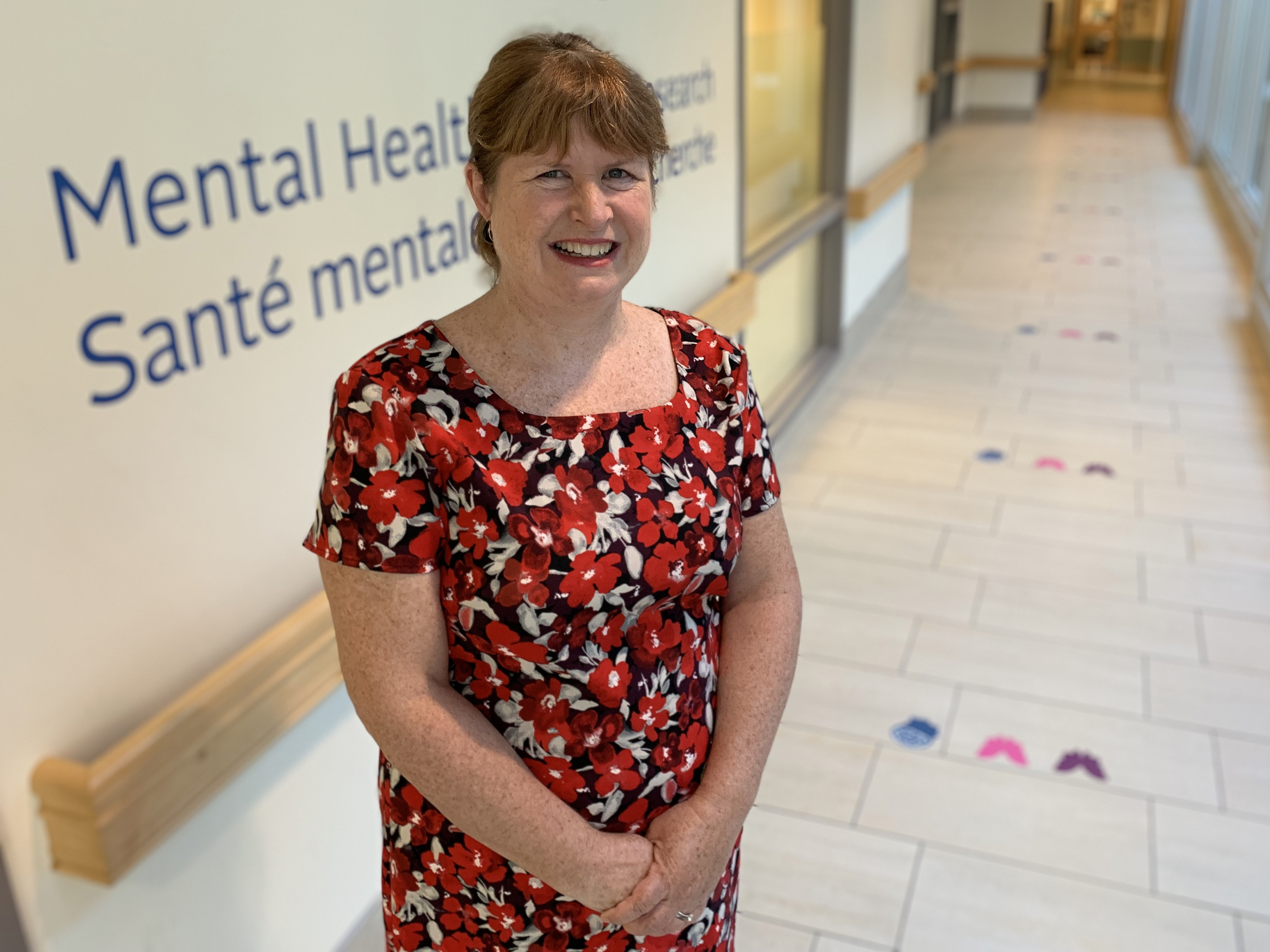 Anita Manley is part of a national campaign to raise awareness of mental illness and give hope to those who need it most.

Meet one of the Faces of Mental Illness

Ottawa’s Anita Manley, a friendly and familiar face at The Royal, is part of a national public education initiative designed to raise awareness of mental health and help end the stigma associated with it.

The Faces of Mental Illness campaign highlights the stories of Canadians living in recovery from mental illness, which will be featured during Mental Illness Awareness Week (MIAW) from October 6 to 12.

Hundreds of people across Canada applied to be part of the Faces campaign but only five were chosen.

Manley’s story is one of hope and recovery. It begins in her teens, in the 1980s. Her father noticed she’d lost interest in teenage life but Manley didn’t seek the help she needed for fear that people would think she was “crazy.”

She was hospitalized for the first time during her university years. There was a suicide attempt, but no formal diagnosis. Although she spent her 21st birthday on the psychiatric ward at Brant Memorial Hospital, she went on to complete her degree, meet her first husband, and have two daughters.

“And then things came toppling down,” describes Manley.

Life stresses – including a divorce – affected her greatly. She was hospitalized at the age of 32 with a diagnosis of bipolar disorder. A few years later she started hearing voices.

“It was very scary and very confusing,” says Manley. “As a result of that I lost everything, because I truly believed these delusions to be true. There was nobody that could tell me they weren’t true.”

She lost the ability to pay her bills and was evicted from her apartment. She refused all treatment and became homeless.

“I lost connection with all of my friends, all of my family – including my teenage daughters – and was totally estranged for three years from everybody in my life,” says Manley. “The only people that I was friends with were people who were paid to care for me. It was really difficult. I lost everything.”

Manley started taking steps to regain her life when she was admitted to The Royal in 2011.  Her psychiatrist asked Manley if she wanted to see her children again – of course she did – and spent seven months in intensive treatment with that goal in mind.

Soon after, Manley reconnected with her youngest daughter. She met her future husband in 2015. And she’s giving back. Since March 2012 she’s clocked over 3,330 volunteer hours at The Royal. She facilitates wellness groups for women – including a journaling group – and is a fierce advocate for patients who speaks publicly about mental health and wellness.

Recovery is not often a straight line – it ebbs and flows – she says, but her recovery really took off when she started volunteering.

“I had a sense of purpose,” says Manley. “I was waking up in the morning and I was giving back to people. I had a goal of helping people recover. I was receiving feedback that I was being really helpful and that made me feel better about myself.”

Manley emphasizes the importance of self-care as part of the recovery process (her words to live by include: “be good to your future self” and “this too shall pass”) and is excited that her message will be heard across the country via the Faces campaign.

The Faces of Mental Illness is coordinated by the Canadian Alliance on Mental Illness and Mental Health (CAMIMH) along with member organizations and other supporters across Canada. For more information, go to camimh.ca.