Be in the Band: Making musicians and transforming lives 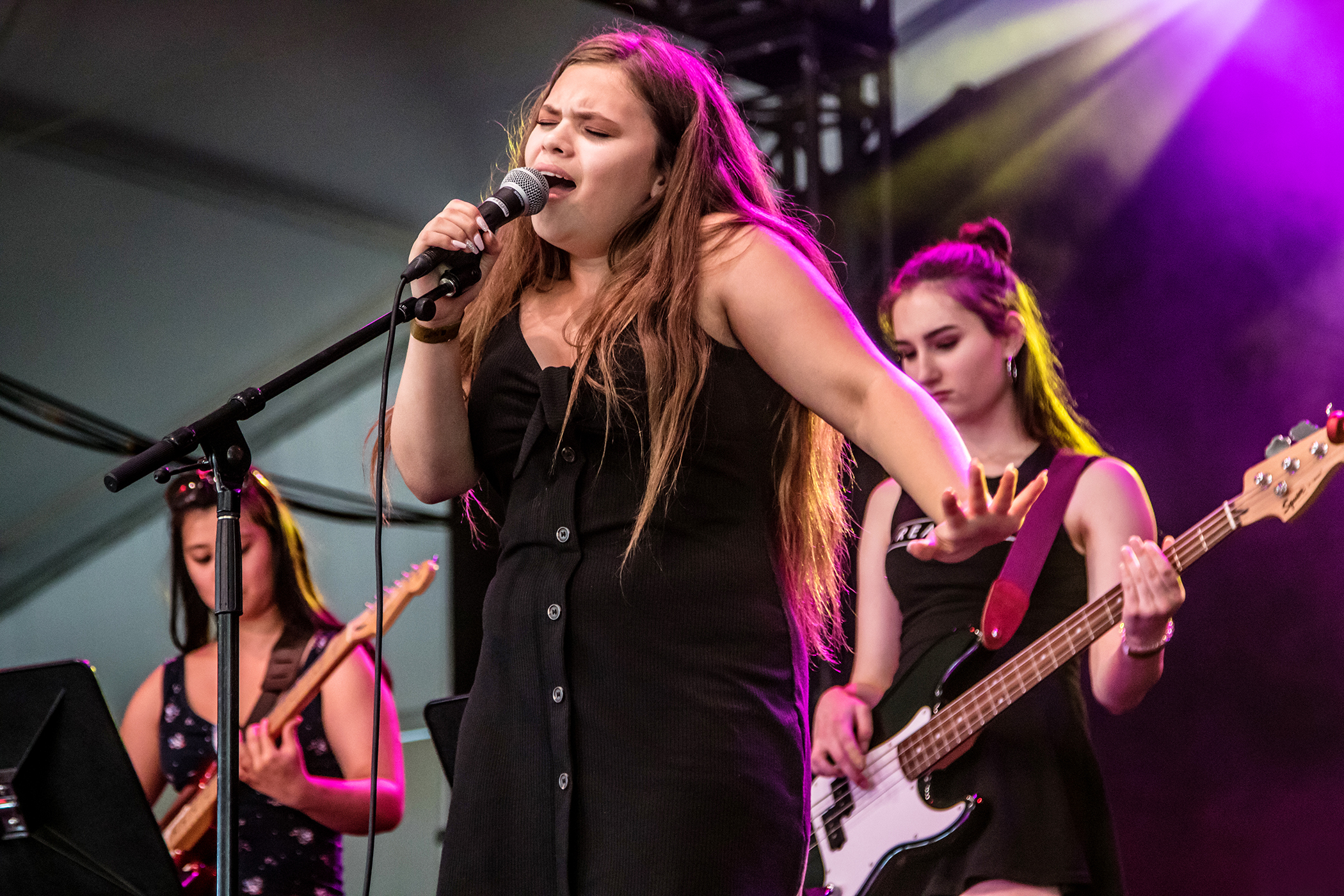 Mackenzie Albert credits Be in the Band for helping her find the courage to audition for a musical at her school. Photo by Andre R Gagne.

It’s easy to see why parents and youth have described RBC Bluefest’s “Be in the Band” program as transformative and life altering. The benefits are far-reaching and can change the trajectory of a young person’s life.

Be in the Band connects aspiring young musicians to other band-mates and a musical mentor. They meet for weekly sessions from April through July to develop and rehearse a set list that includes original compositions. As a grand finale, there is a community concert and in most cases, a special performance at RBC Bluesfest.

Be in the Band is about honing skills, learning something new, and working as a team towards a common goal but it’s also about connecting with likeminded individuals and sharing a creative outlet. Over the years it has helped hundreds of young people in Ottawa.

"Kids – teens especially – have a hard time expressing themselves, especially if they're dealing with anxiety or depression,” says Sue Walton, who is responsible for community relations at the Royal Ottawa Mental Health Centre and is also the liaison between The Royal, RBC Bluesfest, and the participants.

“This is just one tool in our toolbox to help young people,” says Walton. “It’s a safe place to build confidence and make friends.”

How does RBC Bluesfest Be in the Band work?

Alan Marsden has been the RBC Bluesfest Be in the Band community program manager since its beginning in January 2009. He estimates there were 120 kids in the 2019 program, which runs across Ottawa high schools, community centres, and The Royal.

Be in the Band counts on each location to get the word out. At least one year of musical experience is required – whether it’s playing an instrument or vocal training – in order to “be in the band.” A "meet and greet" is scheduled, at which point Marsden, along with the musical mentors, come together with the young musicians. The participants are sorted into bands depending on skill levels and musical interests. ("We try not to pair up the Taylor Swift people with the Metallica people," he laughs.)

Marsden is also responsible for hiring the musical mentors. These “band coaches” are professional musicians, and there is one assigned to each group.

The coach plays a unique role in the process. They’re mentors and also cheerleaders, instructors, confidantes, and life coaches. They inspire, motivate, keep the band on track to meet their goals, teach the students about what it actually means to be in a band, and of course, ease feelings of fear and anxiety.

"We tell them not to be psychologists,” says Marsden. “Their main job is to focus on the music. I try to hire experienced people, kind people, who maybe even have kids and can understand, and have the level of patience needed, for this particular gig.”

Music and performing skills aside, Be in the Band participants learn a lot during the process: goal-setting, hard work, perseverance, collaboration and leadership skills, and dealing with anxiety and the pressure to put on a good show.

Mackenzie Albert, 17, has been in the program for three years as a singer. She first learned about Be in the Band four years ago but didn’t sign up because of “wicked stage fright.” When the opportunity came by again a year later, she reconsidered.

In her first year, Carr "absolutely" saw a change in her daughter, who was struggling with anxiety at the time. Carr describes Mackenzie’s Be in the Band experience as a “turning point in her behaviour.” In fact, after her first year in Be in the Band, Mackenzie found the courage to audition for a musical at her school. "It was probably one of the best experiences of my life," she says. Musical theatre has since become a passion of hers.

Carr reflects upon the exponential growth of her daughter’s confidence over the years, which were put to the test at her band’s performance at RBC Bluesfest.

“I couldn't help but remember the small girl with her eyes closed and gripping the microphone, her voice shaking, and seeing that juxtaposition of those two people and seeing how far she’s come,” says Carr. “It was quite overwhelming for me.”

Evan Cosman, 18, just completed his first year with Be in the Band, which also concluded with a performance at RBC Bluesfest. His mother, Nancy Cosman, says she’s seen a positive shift in Evan's level of commitment. “I really liked watching him follow through on something and seeing the whole process from start to finish,” she says. “He knew he had other people relying on him, and that encourages and enforces that commitment. He stuck with it. He was committed to going."

Parents of RBC Bluesfest Be in the Band participants aren't allowed backstage. Sometimes the first time they see the results of their child's hard work is at the end-of-year performance.

During Mackenzie’s set at RBC Bluesfest this year, Carr says she was busy "taking it all in and trying not to cry.”

“I loved seeing her so confident and happy up there,” says Carr. “I think that's your ultimate goal as a parent, you want your child to be successful and fulfilled and happy and I see her up there being all of that."

"Bluesfest was a lot of fun," recalls Evan, who initially signed up for Be in the Band as a way to connect with people who share his love of music. "It was nerve wracking, but in a good way."

Nancy fondly remembers members of the audience clapping along to the music: “I was blown away.”

Marsden attends all of the final performances.

"It's my favourite part – to see the transformation,” says Marsden. “As much as it's about the band and the music, I like to see the way the kids are carrying themselves differently. I used to joke that the program is actually a transformational program, with music as the foil."

Surprisingly, when asked, the big RBC Bluesfest performance isn’t the first thing that springs to mind when Mackenzie is asked about her favourite thing about Be in the Band. For her, it’s about the people.

“The connection that we have has always been a highlight of the program,” she says. “You build really strong friendships there.”

Arts as a pathway for life

Marsden recently ran into a Be in the Band "graduate" who participated in the first year of the program at The Royal. The impact on the Be in the Band alumni was profound.

"He said that he suspected the program saved his life at the time," describes Marsden. "He was a very very creative person who wasn't being encouraged to follow through with that energy for whatever reason. This program finally gave him the opportunity to express himself through that creativity. All of the pressure in life was on getting a job, doing practical things... creative people need the outlet. All of the life skills that you need – there are group skills, leadership, team building – all of the skills that are supposedly not present in the arts, are present in these programs. I think it's really important to understand that.”

Mackenzie, who is taking a gap year now that she’s graduated from high school, is hoping to fill her resume with musical achievements, including musical theatre experience. These are goals she never would have considered when she was a younger, and it’s clear that music is figuring in her future one way or another.

"I hope to make it my full time career, but it is a very hard path to follow and not everybody makes it,” she says. “I'm hoping if I work really really hard that I will eventually get noticed.”

He has some words of advice for anyone thinking about signing up for Be in the Band. "If you're on the fence, I'd say just go for it. There are a lot of benefits and there's not much that can go wrong,” he says. “You don't need to be amazing to be able to play with other people. It's fun. Just go for it."

For more information about RBC Bluesfest Be in the Band contact Sue Walton at sue.walton@theroyal.ca.