Telemedicine for young adults: help when and where they need it 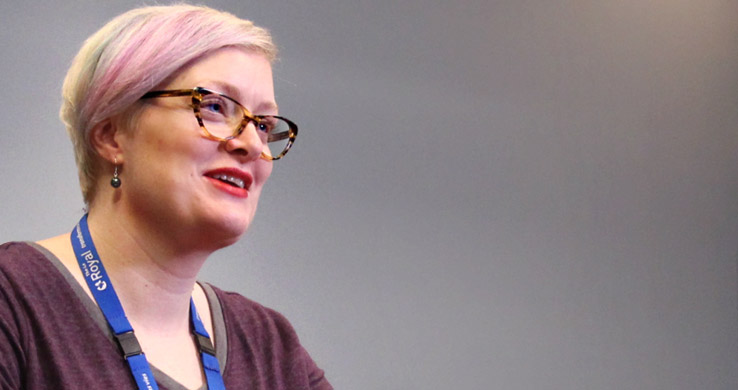 In 2017, psychiatrists at The Royal consulted with 128 transitional youth via telemedicine.

These young people, between 16 and 24, are at the age of transitioning from child and youth services to adult services. In this time, it’s easy for them to fall through gaps in the health care system.

Unfortunately, it’s also the period when most young people face a lot of new, intense stressors.

“Many are going away from their homes, often into the most stressful chapter of their lives,” says Dr. Gail Beck, clinical director for The Royal’s Youth Psychiatry Program.

“You have all these intensified psychosocial stressors, including growing rates of food and housing insecurity. Add mental illness to the mix, along with service gaps, and you have the ingredients for a crisis.”

Thanks in part to a $100,000 donation from the Royal Bank of Canada (RBC), The Royal’s Telemedicine Program’s services for transitional youth expanded by almost 70 per cent. The Royal was able to scale up its partnership with Upstream, which triages referrals from community agencies and serves as the point-of-contact for telemedicine clients in Ottawa. Instead of once a month, it now holds clinics three times each month.

This partnership “has made a tremendous difference to our patients,” writes Judy Hill, executive director of the Petawawa Centennial Family Health Centre.

Dr. Leah Layman-Pleet has experienced this growth firsthand; she has gone from doing one clinic a month for transitional youth to three or four.

The consultations are meant to provide future direction for the patient and their referring physician. This may mean medication recommendations, or redirection to focused services for specific concerns.

“Often, though, these young people haven't had a diagnosis or even seen a psychiatrist before, and they’re looking for a better understanding of what's going on,” says Dr. Layman-Pleet.

So far, feedback from patients has been overwhelmingly positive; all patients who have filled out a survey say that the services were helpful and they would recommend them to a friend or relative.

“Professionalism. Privacy. Caring about the patient. Don’t change a thing,” said another.

The service doesn’t just benefit the individual patient, though. It helps build the referring physician’s comfort and ability to care for patients with similar concerns in the future.

“When we write our recommendations, we try to tell the primary care provider why we’re doing what we’re doing,” says Dr. Layman-Pleet.

“If the consultations are written up in a way that the referring doctor knows why the choices were made, it helps more than just the one person we saw.”

With part of the RBC donation, The Royal also developed a six-part education series focused on transitional youth, which has reached more than 200 front line care providers via telemedicine. Half of the sessions focused on substance use among young people — something especially relevant because 70 per cent of young people seen at The Royal for mental health issues also use drugs.