Youth Award Winner Turns Pain Into Hope for Others 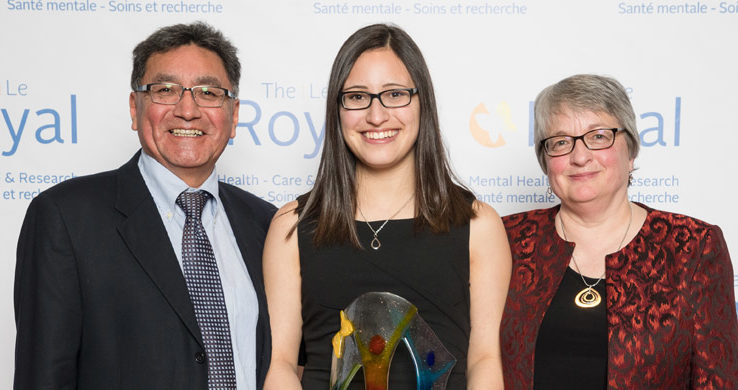 Gabrielle Eyahpaise with her parents at the 2019 Inspiration Awards

Gabrielle Eyahpaise was 14 when she was diagnosed with obsessive-compulsive disorder (OCD), but she’d already been struggling with symptoms for years.

“I’d always been an anxious kid. I remember staying up at night and worrying about school, my family, and accidents that could happen to them,” she says. The thoughts gradually became more intense, and Eyahpaise started to do repetitive behaviours to calm them.

“It started affecting me at school and in my family life. It was just taking over more and more space in my life,” she says.

OCD is a combination of obsessive thoughts – intrusive, unwanted thoughts – that are only eased by compulsive behaviours. For Eyahpaise, these behaviours included checking different things, and washing her hands hundreds of times a day. She tried to hide what was happening, but it eventually took up so much of her life she couldn’t anymore.

“When I was at my darkest time, I felt so alone and like nobody understood and very isolated. It felt like I was living in a nightmare and no one could see. It was just darkness, there was no hope, there wasn’t even life anymore,” she says.

Left home-bound, and often bed-bound, she began feeling helpless and became suicidal. Eyahpaise celebrated both her 17th and 18th birthdays as a patient in the Youth Psychiatry Program at The Royal.

"You’re struggling, and that’s okay, but there is a way out and there is support out there. You’re not alone in this."As she began to recover, Eyahpaise also began to feel less alone. Inspired to continue in her healing, she travelled to the International OCD Conference and learned about Exposure and Response Prevention (ERP), a treatment that would ultimately work for her.

In addition, Gabrielle also began attending local support groups, such as OCD Ottawa. Within a year, she became the OCD Ottawa youth group lead, offering her own experiences and knowledge with participants.

“I started being interested in advocacy because I really struggled with feeling like I was alone and no one really understood what I was going through, especially my age, so I decided to start a young adult support group for people my age to share what they’re going through,” she says.

“There, people are allowed to share whatever they want to share with no judgment, and we’re really there to help each other out and share our coping strategies.”

Today, Gabrielle continues to speak publicly, including to high school students through The Royal’s “Is it Just Me?” program. Her openness and honesty has encouraged many youth to open up, feel understood, and no longer alone.

“You’re struggling, and that’s okay, but there is a way out and there is support out there. You’re not alone in this,” she says.