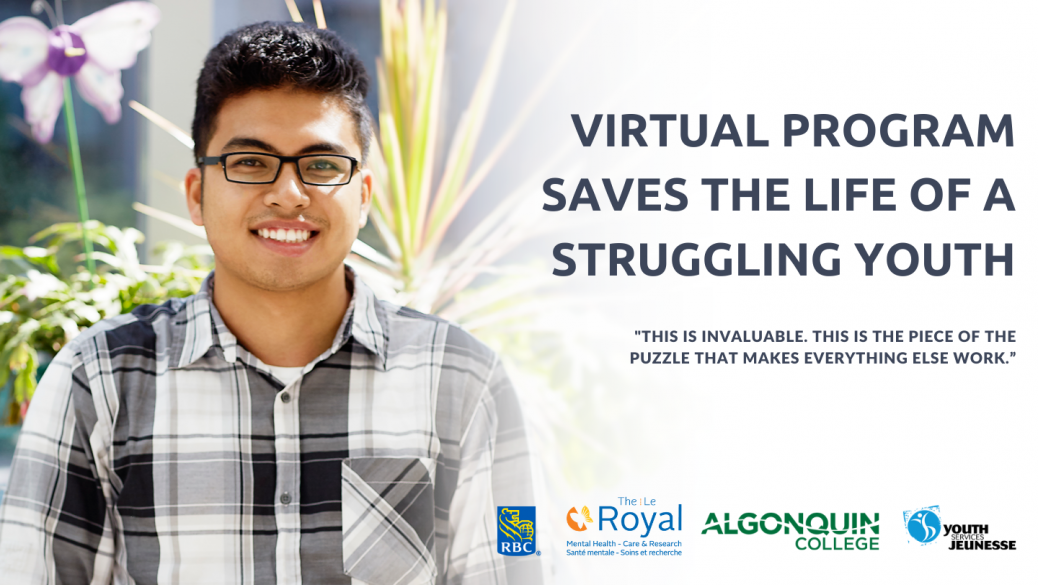 For many, it is a challenge to find something positive that has come out of the COVID-19 pandemic. For one student at Algonquin College, however, thanks to a donation from the RBC Foundation, there is a happy story and a life saved.

Last fall, while struggling with his feelings of depression, Henry (not his real name), made the brave choice to go to Algonquin College’s Counselling Services. The Counsellor referred Henry to see a family doctor within their Health Services Clinic, who then referred Henry for a psychiatric consultation with The Royal.

Thanks to a $250,000 donation to The Royal from the RBC Foundation, clients at the Youth Services Bureau and students at Algonquin College have significantly improved access to virtual care (also known as telemedicine) to support their mental health needs.  Henry was able to receive timely virtual care through modern telecommunications technology. It allowed him to “visit” with his physicians in real time via a secure video link.

During the consultation, Henry was diagnosed with major depressive disorder.

The consultation report recommended that Henry receive Interpersonal Psychotherapy (IPT) to help treat his depression. By virtue of the partnership between The Royal and Algonquin, thanks to the RBC Foundation, Algonquin’s counselling team had received training in IPT earlier in the year. The Counsellor was able to use an IPT framework to help Henry learn how to set healthier boundaries and create strategies to better manage his anxiety and depression.

Counselling also helped Henry to navigate periods of higher stress in his life. At one point, Henry began to have serious suicidal thoughts. The Counsellor was able to help deescalate Henry so that he remained safe without requiring immediate medical attention.

The partnership between Algonquin College and The Royal also enabled the counselling team to receive clinical supervision from a psychiatrist. This was key on several occasions for Henry as his counsellor was able to clarify IPT concepts and get advice on how to best support Henry by easily consulting directly with Henry’s psychiatrist.

“When we heard about The Royal’s new program to offer more counselling virtually to students, we knew we had to help,” says Marjolaine Hudon, Regional President - Ontario North and East, RBC Royal Bank. “This example reinforces how much young people need this support right now.”

When the counselling appointments at Algonquin College concluded, Henry reflected that he had begun to accept his depression as an illness, and he was much better able to understand and manage it.

By facilitating access to timely psychiatric care and by sharing The Royal’s expertise with Algonquin College; the special partnership greatly improved Henry’s quality of care and quality of life.

“This has been incredibly helpful before the pandemic and ever since it began,” says Ben Bridgstock, Director, Student Support Services, Algonquin College. “Access to psychiatry makes it possible to get a diagnosis for individuals in our community. It gives our health care professionals access to someone who can give guidance about patient care and not just recommend referral routes but also expedite referrals. This is invaluable. This is the piece of the puzzle that makes everything else work.”

Thanks to the evidence of this partnership, Carleton University and Ottawa U have adopted a similar virtual care program for their students. This equates to over 40,000 youth who now have access to this expertise, and, as Henry taught us, life saving care.

Number of individuals trained or developed as a result of this grant: