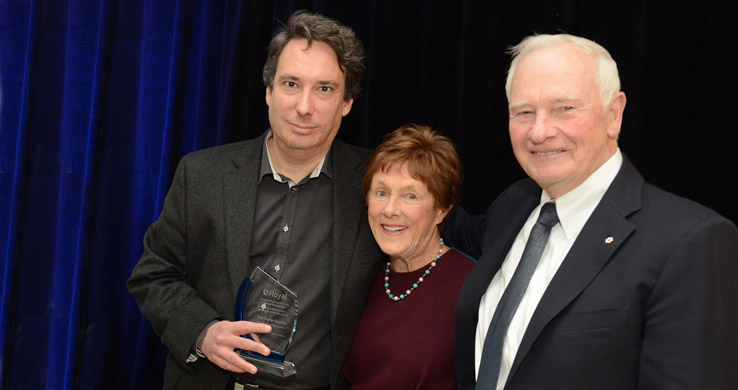 On October 28th, in a ceremony celebrating Canadian innovation, Dr. Jean Martin Beaulieu was awarded the first-ever Royal-Mach-Gaensslen Prize for Mental Health Research. Dr. Beaulieu is a 43-year-old researcher and associate professor in the Department of Psychiatry and Neuroscience at Laval University. Among those in attendance were Their Excellencies the Right Honourable David Johnston, the Governor-General of Canada, and Mrs. Sharon Johnston.

An appreciative Dr. Beaulieu thanked The Royal and the Mach-Gaensslen Foundation, joking that the $100,000 prize money was a “life insurance policy” to help keep his research going.

The Royal-Mach-Gaensslen Prize for Mental Health Research was established earlier this year with a $1 million gift to The Royal from The Mach-Gaensslen Foundation of Canada, to be awarded annually in increments of $100,000 for 10 years. Its goal is to support Canadian early-career researchers in mental health and encourage them to continue to pursue their research in Canada.

"We are part of a strong, vibrant, national research community here in Canada. We believe that the innovative and collaborative mental research done throughout Canada will lead to great things and that Canada will have an impact on a global scale." - George Weber, President and CEO of The Royal

Dr. Beaulieu’s research has the potential to do just that.

With help from The Royal-Mach-Gaensslen Prize, Dr. Beaulieu’s research could ultimately lead to the development of a drug to replace Lithium, a major mood-stabilizing drug used today to treat bipolar disorder, schizophrenia, and depression. Finding a replacement with fewer side effects is a research challenge because very little is understood about how Lithium actually works.

Dr. Beaulieu is advancing knowledge in this area and has already contributed to several ground-breaking discoveries. Of particular significance, he discovered a new signaling pathway within brain cells that, when targeted with Lithium in the brain cells of manic mice, stabilized the behaviour of the mice. By building on this discovery, his team is now experimenting with different chemical compounds in an attempt to replicate the mood-stabilizing effects of Lithium that they observed in the mice and also reduce the side effects of medication.

"We hope this prize will encourage other young Canadian mental health clinical researchers like today’s winner to continue their recognized research and also demonstrate to the world the high quality of excellence of Canadian researchers. "      - Dr. Chris Carruthers, Chair of the Mach-Gaensslen Foundation

Dr. Beaulieu was selected by an international panel of mental health experts led by Dr. Zul Merali, President and CEO of The Royal’s Institute of Mental Health Research. “We examined each applicant’s work for innovative thinking, for imagination, and for originality,” explained Dr. Merali. “We looked for someone whose work we felt was capable of contributing to breakthroughs in mental health care.”

To date, Dr. Beaulieu has received five patents in the area of psychopharmacology and has authored or co-authored 71 published papers, many of which have appeared in influential and high-impact research journals, including Cell, PNAS, Molecular Psychiatry and Biological Psychiatry. His work has been cited by other researchers more than 4500 times (an extremely impressive number for someone so young in his career) and he has won a number of prestigious international scientific awards. The Royal-Mach-Gaensslen Prize is an important Canadian recognition.

“The path to better mental health is through research; only by broadening our knowledge of the brain and exploring new approaches to care can we help the millions of people who suffer every day,” said Mr. Weber. “Our partnership (with The Mach-Gaensslen Foundation) is a perfect fit and has produced initiatives that we believe will help change the landscape of mental health research in Canada.”

Dr. Carruthers also hopes that the establishment of The Royal-Mach-Gaensslen Prize will encourage other organizations or individuals to “step forward to support mental health care and research, particularly at The Royal.”