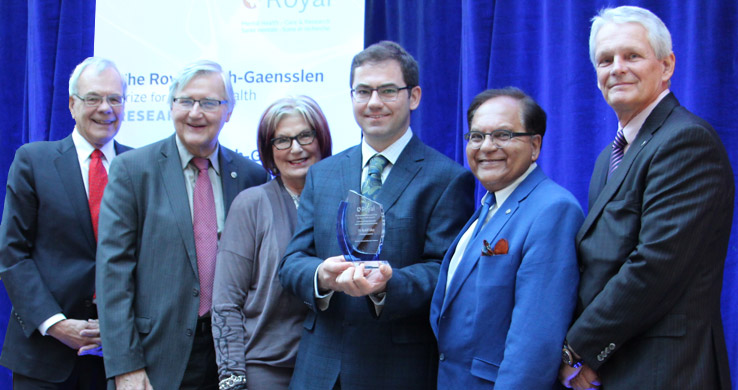 Imagine if we could find a way to permanently reduce mental illness?

A researcher and professor at Dalhousie University in Nova Scotia is embarking on just such a study; examining genetic markers as indicators for potential mental health issues, but also seeking to use early intervention as a means of pre-empting those illnesses.

“The genetic variants are a big part of it, but I’d like to say it’s more an interplay of nature with nurture,” explains Dr. Rudolf Uher who is also the Canada Research Chair in Early Intervention in Psychiatry. “Where we end up in life, healthy or unwell, that’s the result of multitudes of genetic and environmental variants.”

Dr. Uher is the 2016 winner of The Royal-Mach-Gaensslen Prize for Mental Health Research, an $100,000 award recognizing the innovative and original work of young mental health researchers in the country.

"The research that Dr. Uher is conducting is ground breaking." - Dr. Chris Carruthers, Chair of the Mach-Gaensslen Foundation

“Nobody has embarked on such a long-term project that could potentially impact the well-being of people all over the world,” said Dr. Carruthers.

Dr. Uher’s goals are quite clear.

“I am developing and testing early interventions to prevent severe mental illness in youth at risk,” said Dr. Uher. “By early adolescence, we can predict the risk of mental illness with a degree of accuracy that allows targeting positive psychological interventions which give youth the best chances of sustaining mental health.”

The second essential component of his strategy is the development of a unique and personalized approach to wellness for each child.

“I heard so often a father or mother saying ‘I’m worried about my son; I see in him the way I was at his age. I don’t want him to develop my problems’,” he explained. “We wanted to do something about it. It’s why I was attracted to early intervention. We literally are one of the first ones trying it.”

As co-founder of the Families Overcoming Risks and Building Opportunities for Well-Being (FORBOW), he looks at the mental health of families as a whole. If adults have a history of mental illness, it’s often a good indicator that their children could run the risk of similar issues.

But the discussion of early intervention was when there were already signs and symptoms showing, he explained. “At that point it’s almost already at a full mental illness – we weren’t treating patients early enough.”

Dr. Uher and his team are the first to conduct a long-term study on the effects of early intervention with children who have the genetic markers or family history of mental illness. His group offers kids, as young as 9-years old, coaching to help them understand their emotions and learn coping tools. The Skills for Wellness (SWELL) courses encourage children to learn skills to solve and overcome emotional issues.

“It’s much easier to work with anxiety in a 10-year old, than psychosis in an adult,” he said. “When the kids see success for themselves, it only encourages them to try more. It teaches them to break bigger problems into smaller pieces, to question when they act out – and these are general skills that they can employ all their lives.”

The goal is to establish a set of protocols that can be employed universally. The course of treatment, if successful, will provide a foundation of psychological stability that can be taught not only to at-risk children, but to every child.

With more than 300 children registered in the study that annually monitors all participants into their adulthood this research bodes well for extensive data collection over the years as the participants grow up.

"Dr. Uher’s work has put Canada in a leadership position. This is the kind of forward-thinking we need in order to find real and meaningful solutions to mental illness." - Dr. Zul Merali, President and CEO, The Royal’s Institute of Mental Health Research

Dr. Uher was selected from a stellar group of applicants for The Royal-Mach-Gaensslen Prize, said Dr. Merali.

"In childhood and adolescence there are certain critical times for brain development. What Dr. Uher is trying to do is provide prophylactic treatment for these high-risk kids," said Dr. Pajer. "Now if during all those different growth spurts, if you're introducing kids to strategies that can help them identify their own possible warning signs, or their own feelings that might indicate that they're becoming disregulated in their emotions and behaviour, you're teaching them something that can actually help shape their brain development."

The Royal-Mach-Gaensslen Prize for Mental Health Research was established in early 2015 with a $1 million gift to The Royal from The Mach-Gaensslen Foundation of Canada. This is the second time the annual prize has been awarded.