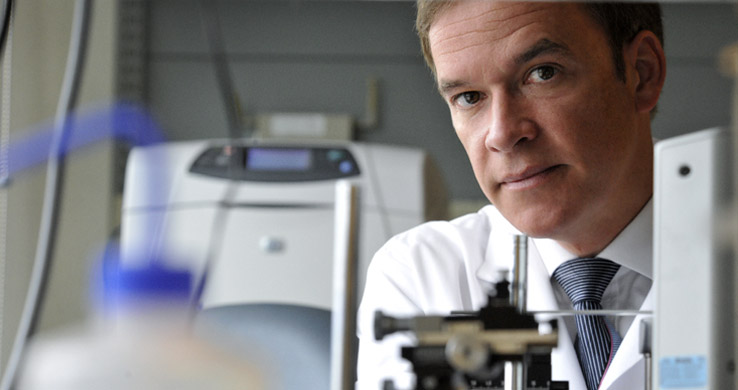 For many people with severe depression who have tried medications but not found anything that helps, ketamine can be a life changing intervention.

Small doses of ketamine (an anesthetic agent that has been widely used for over 45 years) can rapidly lower depressive symptoms in 50 to 60 per cent of patients. What’s more, it can reduce suicidal ideation almost immediately. In some cases, patients who have had ketamine infusions during depressive or suicidal episodes reported feeling positive impacts either immediately after the infusion or within 24 hours afterwards.

While the effects of ketamine treatment were proven to be strikingly fast, they were not long-lasting.

That is, until now.

In a ground-breaking new study, Dr. Pierre Blier, Director of Mood Disorders Research at The Royal’s Institute of Mental Health Research (IMHR) and his research team were able to demonstrate that not only can ketamine be effective in rapidly treating those with severe depression or suicidal ideation – but that it can also have significant and prolonged effects.

According to results published in the American Journal of Psychiatry, repeated ketamine infusions (small doses delivered intravenously) can have sustained antidepressant effects for patients with treatment-resistant depression. The study showed that those who responded to ketamine went on to experience sustained reductions in depressive symptoms with once-weekly maintenance infusions.

“This is the first study that has shown we can decrease the frequency of ketamine infusions once somebody has had a response—and still maintain the antidepressant effects,” says lead author Dr. Jennifer Phillips of the IMHR’s Mood Disorders Research Unit.

How did the study work?

The goal of this study was to understand how to best administer ketamine to maximize and prolong its antidepressant effects, to help make treatments as accessible and effective as possible.

Based on the results, the research team was able to show for the first time that the rapid antidepressant effects of a single ketamine infusion could be re-instated and sustained with repeated infusions (something that is quite atypical of traditional medications for depression). Results also showed that individuals who do not respond to a single ketamine infusion could still respond to the treatment over time with repeated infusions.

In the last phase of the study, the team tested a truly novel strategy: those who responded to the three times per week infusions then received just once-weekly infusions for an extra four weeks. From this, the research team was able to conclude that ketamine’s antidepressant effects could be maintained in all patients when reducing the frequency of infusions.

“Through this study, we were able to test a much more practical way of administering ketamine in a clinical setting,” says Dr. Phillips.

Dr. Blier, who has been studying ketamine’s effect on depression since 2010 – and was the first clinician in Canada to give small doses of ketamine to patients – adds that the results of this study could be revolutionary for research and clinical practice.

“The moral of the story for clinicians and patients is that if ketamine doesn’t work the first time – don’t give up,” he says.

Dr. Blier recommends instead that individuals are given at least two weeks with repeated infusions before evaluating the effectiveness of the treatment. In this most recent study, for instance, he says that while the majority of patients responded after three infusions – some required up to six before showing positive results.

Could ketamine reduce the need for ECT?

With the knowledge of ketamine’s sustained effectiveness now in hand, Drs. Blier and Phillips, along with collaborator Dr. Natalia Jaworska, Director of the IMHR’s Clinical Electrophysiology Lab, have initiated the next step: to determine how ketamine treatment measures up to electroconvulsive therapy (ECT) – the current “gold standard” treatment for those with difficult-to-treat depression.

Because ketamine treatment is much less expensive and less labour-intensive to administer than ECT, says Dr. Blier, the results from this study could be a boon for increasing accessibility to care through treatment alternatives.

Currently, ketamine treatment is only available through a small number of sites across Canada, and through ongoing research studies.

“We know that when ketamine works, it works faster, produces fewer side effects and is much cheaper than ECT,” says Dr. Blier.

“We also know now that ketamine also has sustained effects over time – so if we can demonstrate next that it is just as effective as ECT in helping those who are hard-to-treat, then we could continue to leverage and maximize this alternative treatment’s potential.”